We all need to breathe. But much of the air we inhale contains nitrogen oxides (NOx) and volatile organic compounds (VOCs) — pollutants that can cause everything from asthma to cancer. And that’s a problem: indoors, locally and regionally.

On hot, sunny days, local air pollution can turn into an even larger problem, when the NOx and VOCs from cars and smokestacks undergoes a series of chemical reactions that generate smog.

The result can blanket the entire region, leading to thousands of premature deaths, overloading emergency rooms and making it dangerous to exercise outdoors.

We all need air to breathe. But ambient air pollution — from vehicles, industrial facilities and other outdoor sources — makes that difficult.

As of 2013, almost 90 per cent of the world’s population lives in areas where outdoor air pollution exceeds the World Health Organization’s Air Quality Guideline.1

The effects are deadly. In 2016 alone, ambient air pollution killed 4.2 million people and affected the health of many more.2

A cocktail of pollutants

Ambient air pollution contains a cocktail of substances, including nitrogen oxides (NOx) and volatile organic compounds (VOCs). Those are dangerous in their own right, creating problems that range from coughing and wheezing to central nervous system problems and cancer.3,4

But the damage doesn’t stop there. When exposed to sunlight, these pollutants can create ground-level ozone: a significant contributor to asthma, respiratory diseases and other breathing problems.5

Today, more people than ever are feeling the impact. According to the Organization for Economic Co-operation and Development (OECD), the number of premature deaths caused by ambient ozone pollution increased by nearly 30 per cent between 2000 and 2015.6

Hot, sunny days can also trigger photochemical reactions that transform NOX and VOCs into smog. Smog can blanket an entire region in pollution or get blown hundreds of kilometres, creating health impacts far from its original source. In fact, studies have shown that air pollution from Asia can travel across the Pacific Ocean, all the way to North America.7

Those health impacts range from minor to lethal. Smog irritates eyes, noses and throats. It aggravates heart and lung problems. Meanwhile, pregnant women exposed to ambient air pollution are more likely to have babies with low birth weights and other complications.8

Smoggy days lead to thousands of premature deaths, overload emergency rooms and make it dangerous for even healthy people to exercise outdoors. In London, nearly 9,500 people die prematurely each year because of air pollution.9 In many other countries, the toll is even higher. In Beijing, for example, breathing the smog-filled air creates the same health risks as smoking 40 cigarettes a day.10 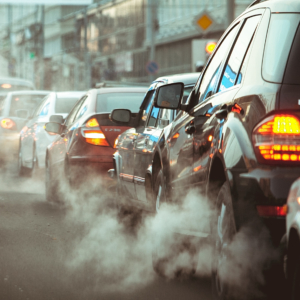 Industry and traffic are a big part of the problem, generating NOx, VOCs, particulates, sulphur dioxide and more. And people living or working near major roads, highways or industrial emitters suffer the greatest health consequences.

The World Health Organization (WHO) has declared outdoor air pollution a public health emergency,1 responsible for 4.2 million deaths in 2016.2 Traffic is a big part of the problem.

Although most countries have put emissions standards in place, increasing urbanization has led to more congestion3 — and thus the kind of stop-and-go traffic that produces more pollution.

Meanwhile, there are more vehicles on the road than ever,4 each one generating nitrogen oxides, volatile organic compounds (VOCs), particulates, sulphur dioxide and more. In China, for example, the number of vehicles doubled between 2009 and 2011,5 making traffic the single largest source of urban air pollution.6

Even in high-income European countries, more than three-quarters of residents live in areas where the level of outdoor air pollution exceeds WHO guidelines.7 According to OECD estimates, about half of that is due to road transportation.8

Nor do concentrations need to be high to create health problems. In two recent studies, Harvard researchers found air pollution levels below EPA thresholds still increased the risk of premature death in Americans 65 and older.9

According to the Health Effects Institute, people who live close to high-traffic roadways have the highest health risks. In North America, nearly 45 per cent of residents in big urban centres live within 500 metres of a highway or major road — the zone most affected by vehicle emissions.10

More than 58,000 premature deaths in the U.S. can be linked directly to poor air quality from the transportation industry.16 And the price tag is high: in OECD countries alone, the health impacts of traffic total an estimated US$85 billion.17 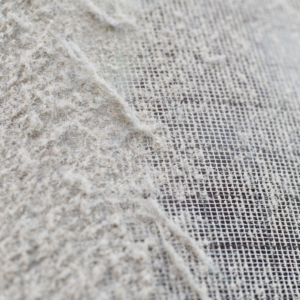 Typical North Americans spend more than 90 per cent of their time inside buildings, where the air quality is often worse than outdoors.

Traffic and industrial pollution can sneak inside through doors, windows and HVAC systems. Meanwhile, paints, carpets and construction materials give off VOCs, including formaldehyde.

A typical North American spends more than 90 per cent of their time inside buildings. That makes the quality of the air in those spaces a big concern.

Air pollutants make their way into homes and offices through open windows, doors and ventilation systems. They also infiltrate through cracks and leaks in the building envelope2. As a result, buildings located near busy roads and industrial areas can have dangerous elevated levels of nitrogen dioxide (NO2), volatile organic compounds (VOCs), particulates and more.

For example, schools located near petrochemical plants in Spain had higher levels of benzene in their classrooms3, while an Australian study found increased levels of NO2 and toluene in homes within 50 metres of major roads4.

This kind of industrial and traffic-related pollution can have serious consequences — increasing the risk of everything from low birth weight babies5 to asthma6, poor school performance7, cancer8 and dementia9.

However, outdoor sources are just one part of the problem. A number of dangerous pollutants actually originate indoors: from the operation of printers and photocopiers; off-gassing from new furniture and carpets; the use of paints, adhesives, cleaning chemicals and aerosol sprays; and activities such as cooking and smoking.

For example, research in the Chinese city of Hangzhou revealed VOC concentrations inside homes were higher than those recorded outside. The levels were highest in new buildings, due largely to solvents, paints and home decor10. According to the U.S. Environmental Protection Agency, health risks created by VOCs include headaches, nausea, fatigue, liver and kidney damage and cancer11.

Because we spend so much time indoors, the health impacts can be serious — and even deadly. They hit children and the elderly particularly hard.